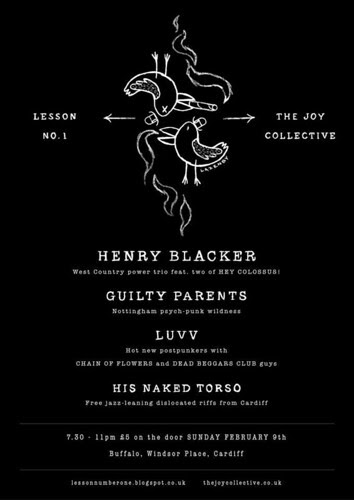 In tandem with the almost holy Joy Collective, as is often the case in these insecure times, Lesson No.1 is back after a four-month period wandering in the desert and not promoting gigs. The last one I did included a set by someone who, a few weeks after, started to [POST EDITED TO REMOVE REFERENCE TO THINGS WHICH, WHILE FAIRLY OBVIOUSLY TRUE, PROMPTED ITS SUBJECT TO LEAVE ME A VOICEMAIL THREATENING LEGAL ACTION. PRETTY SURE NOTHING THIS GUY DOES IS WORTH EVEN THE PROSPECT OF FIVE MINUTES OF MY TIME BEING TAKEN UP]. What a complete wanker Kristian Cole (To The Lovers Farewell, Red Venice Records) is. Nevertheless, I feel confident that lightning will not strike twice in regard to the four bands on this bill.


“Us the headliners?” asked Joe from HENRY BLACKER when their place at the top of the bill was mooted. We’re only a few gigs old, he continued. This is true, but featuring two-thirds of the mighty Hey Colossus, this three-piece from south-west England have experience in abundance, and play music that rocks a fissure through the generations. Their debut album (‘Hungry Dogs Will Eat Dirty Puddings’, recently released on the Riot Season label) deals in raw and somewhat deranged punked-up proto-metal that, at various moments, harks back to 1970s free festival Mandrax biker rock, pre-‘Nevermind’ Seattle grunge and Kyuss-style 90s trippiness (I also detected floral notes of ENDLESS BOOGIE, LIGAMENT and RYE COALITION here and there). Abandon your grooming plans.


When Nottingham’s splenetic twosome GUILTY PARENTS were hitting Lesson No.1 up for a gig around this time, the hook – not that I required one – was that they’d have their debut album available to buy here too. Not sure what happened to that, although I believe it was recorded in October, so can’t be that far away. Thing is, this band are terrific, and sound vibrantly LIVE! even though I am yet to see them LIVE! They play exciting and atmospheric garage/punk/hardcore/art rock with lots of effects and flashing lights, but also catchy riffs and hooks and suchlike. Useful points of comparison are kind of fleeting, but their two previous tapes (streamable on das Bandcamp) gave me vibes similar to ...TRAIL OF DEAD, BUTTHOLE SURFERS, HUNCHES, WRANGLER BRUTES and Area Band ZINC BUKOWSKI.


Featuring former/current members of Chain Of Flowers and Dead Beggars Club, LUVV are only a few gigs old, having formed last summer sometime, but going on the first few tracks the quartet have fired into the void, it sounds like they’re gunning for an early 80s British postpunk type thing with maybe some olde tyme New Zealand indie in there as well. They may not agree. The important thing is, it’s dead good. A wee dram of hype has already been poured into the tumbl(e)r of sonic consumption, for example the music guy from the Western Mail making them one of his 40 Bands You Must Hear In 2014. The other 39 bands were all The Keys, but still.


Finally – in the sense that they’re the last band I’m writing about here, and that I’m putting them on having inexplicably not done so before – we have HIS NAKED TORSO. This Cardiff duo stack up guitar, drums, keys, electronics and unhinged vocals in victorious fashion; replete with complex time changes to wrongfoot you, they are a sort of freely jazz-ish take on 90s Skingraft Records bands like ARAB ON RADAR.


This gig is at Buffalo, which is under new ownership since it had a bit of a financial wobble late last year. It doesn’t seem to be doing many gigs at the moment, but as far as I know it’s business as usual for those turning up. Doors 7.30 or so, done by 11, a fiver on the door, go out the back if you want to smoke one of those cigarettes which make you look so cool, and me envy your coolness.