dea Lesson No.1: MORPH FUN IN THE NEW WORLD

MORPH FUN IN THE NEW WORLD The first gig of 2013 which Lesson No.1 is involved in takes place on Feb 20, this coming Wednesday at the time of writing. The bill has been assembled by F.Y.B, which stands rather rudely for Fuck Your Band and is manned by the members of THE DEATH OF HER MONEY. It’s Alex from the band’s birthday, so he’ll be kicking back and staying stone cold sober to make sure he doesn’t forget what a great birthday he had. You, on the other hand, are invited to down all the piss you can handle while dancing clubfootedly to the crazy muzik on offer.


BARBEROS come from Liverpool (an aside: I can’t think of any bands from Liverpool which Lesson No.1 has put on before. Between now and the end of this blog post I will check if this is actually the case) and are making their debut in Cardiff. They dress up like... well, just look at this photo. 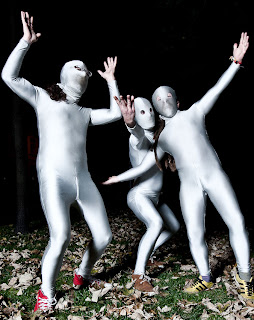 For now, you might associate morph suits with complete and utter twats being ejected from Vodka Revolution for throwing up on themselves. However, if you come and see Barberos play, they will subsequently be linked in your mind to riotous percussion-frenzied crypto-electro mashouts.


Various parts of their discography to date remind me of the Boredoms, Oneida, Action Beat and K-X-P, all of whom are bands widely considered to be at their most entertaining when witnessed live. Barberos have also ‘collabbed’ with Charles Hayward, formerly of This Heat and still a terrific drummer. When I saw him play at a festival last year he was walking around all day in shorts and a blazer and looked like an old, posh Englishman on a foreign holiday. Can’t really imagine him donning a morph suit, tbh.


Also on the bill, due to being on the UK tour with Barberos (the bands share a split 7” which will presumably be for sale), are ULTRA ZOOK, who are a trio from France. Their music is also a rhythmic tour de force, but stylistically they’re more beholden to nutbar prog rock/zeuhl /Rock In Opposition/jazzcore/other so-called genres that neckbeards argue about on last.fm. France produces a lot of these bands, probably because of Magma – the granddaddies of this whole thing – coming from there. Ultra Zook’s songtitles are at least occasionally in the English language, but are also called things like ‘Dance Broccoli Dance’, so I suspect the chances of being able to comprehend them are pretty low. Either way, going on their ‘EPUZ’ mini-LP they seem like they’ll be hecka entertaining circus folk, so come on down.


Before the touring twosome, there will also be two solo performances from folks a little closer to home. MXLX, aka Matt Loveridge, will journey from Bristol for the night to deliver his second Cardiff performance of February – he played Buffalo on Feb 1 as a member of BEAK>. MXLX is more about rushing synthdrone bliss and ear-cleansing explosions of noise, disciplines in which he’s carved himself a great and singular niche since his first solo recordings as Team Brick in the mid-00s. The newest MXLX release is called ‘Black Meta’ and one of the tracks on it is called ‘I Grew Dissatisfied And Went Into A Frenzy’. He is really great at titles.


First on the bill is SVNTREADER, which is the new solo name for Kaskie, singer and guitarist in The Death Of Her Money. I’ve hyperlinked to his Soundcloud page (ooh, I felt really modern writing that) because why not, but should note that I don’t know if any of the music on it will feature in his set. According to the contents of my bedroom floor, when he came round my house on Friday night he listened to Fleetwood Mac, Flour, Brainbombs, Kiss, Althea & Donna, Prince, Blind Idiot God, Slices and Queer’d Science, so perhaps Svntreader will be a combination of all of those acts. The Facebook page description thingy makes it sound pretty neat though: “...leans towards the dark droning industrial vibes with a nod towards elements of witch house with minimal but psychedelic synth sounds, fuck pigeonholing, it's all about K-holing”. K-holing is, I believe, a term for eating Kendal mint cake while in a cave below the earth’s surface, so if you have an active imagination you may be able to replicate that thrill in Undertone.


Doors are at 7pm, it should be done by about 11 and it’s ONLY FOUR QUID on the door. With prices that low, we risk making live music seem cheap and disposable!


Oh, and there don’t appear to be any previous Liverpudlian bands in the Lesson No.1 archives. Tend to assume they all sound like Cilla Black, frankly.