dea Lesson No.1: RECOMMENDED TO BE LISTENED TO ON DRUGS. LOUDLY

RECOMMENDED TO BE LISTENED TO ON DRUGS. LOUDLY 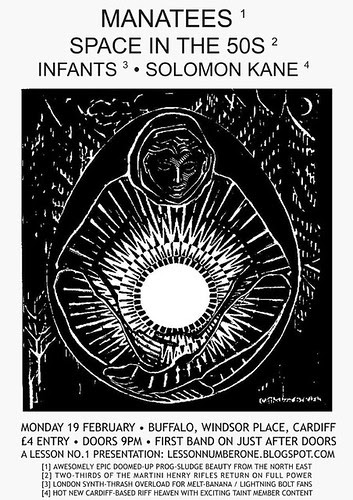 No, we're not being smart. The above title really is the advice of Carlisle's Manatees - headliners of our next action-rammed show on Monday 19 February, since you didn't ask - to anybody slotting on their records. Awe-inspiring, long, graceful and heavy doom-influenced progressive metalscapes, their debut album ‘Untitled’ came out late last year and got gushing praise up the wazoo. Now you’re quite possibly as weary as us when it comes to reading about ‘Neurosis-esque’ bands and the like, but these guys are absolutely at the top of that particular tree, and there’s a whole bunch of other stuff in there besides (King Crimson, Swans, Guapo). Don't believe us? Luckily, through the medium of the intermeweb, there's proof at their MySpace plus via a nifty video thing here.

Space In The 50s head the mega supporting line-up. More details? Sheesh. Well, Cardiff’s Martini Henry Rifles broke up last year. Two thirds of the band have regrouped as Space In The 50s, with a real human drummer this time around. They are still utilising distortion and ugly repetitive riffs, with professed influences coming from Scratch Acid, Monorchid, Butthole Surfers, Landed and so forth, with an extra gob of surf-punk. The lucky will have caught their blunt and beautiful debut after The Blood Brothers the other night. This is their second show.

Infants live in London and number four. They have just (as in, this month) released their first single on the Tiger Trap label, and its unhinged bursts of synthesised guitar noise gutterness have been compared to Melt-Banana, Brainiac and the Blues Explosion. They’re also down with the good people of the breakcore/rave underground, having traded remixes with the totally awesome Drop The Lime, who we last encountered in Bristol jumping face-first into a don't-try-this-at-home stagedive/worrying bleeding head wound combo.

Solomon Kane are another brand new Cardiff band, also playing their second show (although at time of writing they're yet to play their first), featuring Chris from Taint among its lineup. No recordings have surfaced yet, but they’ve been practising to the point of perfection, and a collective taste for mega-riff mania gives a pretty solid indication that if you like your rock heavy and imposing, you will like Solomon Kane.

So bring £4 (plus as much beer money as possible) to Buffalo, Windsor Place, Cardiff. Doors are 9pm, and take note: first band almost immediately after opening.

While we're bigging up one future show, look above and right for all the exciting business we have approaching, more of which SOON.

Oh and for whoever might give a shit we can mention this now: thanks to everyone who came to The Blood Brothers at Clwb Ifor Bach. It was great. It sold out. But, for the record, it wasn't in the end technically a Lesson No.1 show. We handed it over to Clwb because we, ridiculously, weren't allowed to book any local bands at the request of the booking agent/band and were dicked around with the support bands before finally being told there'd only be one (Help She Can't Swim). And while moralistic chest-beating in local music is 200 per cent yawnworthy, we have some kind of principles in wanting to put on as many bands as we possibly can all the time and doing the whole value for money thing. So feel free to start pointing and laughing at the folks who passed up a few quid from a sell-out show.