dea Lesson No.1: DON’T SCREW AROUND WITH ME, GAVERICK

DON’T SCREW AROUND WITH ME, GAVERICK 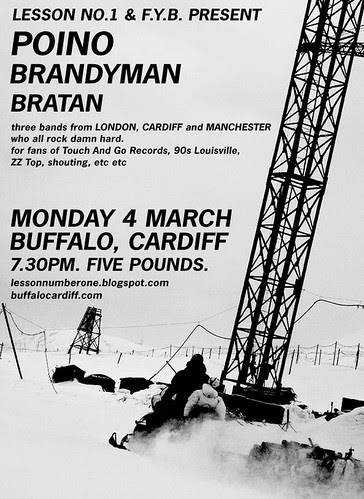 The latest in Lesson No.1 and F.Y.B.’s burgeoning series of ‘bands that got us jazzed last year on our travels to festivals and that’ (following RICHARD DAWSON and QUEER’D SCIENCE [there will probably be more in this series in the future]) arrives this Monday, March 4, in the form of POINO. A trio based in London, Poino have been around for a little over three years, but have a little added band history as individuals – at least, in the case of singer and guitarist Gaverick De Vis (dunno about the other two, sorry lads), who used to be in Giddy Motors. Now they were a good band! I think I saw them in the Cardiff Barfly in 2003 or 2004. Seems an awful long time ago... maybe because it was. Their cover of ‘Eisbär’ by Grauzone isn’t on YouTube, but it introduced me to, er, that song. Which was nice.


Poino have much less of the Pop Group style skronk than Giddy Motors, and much more of the Big Rock cap-peeling riffs. They move fluidly from tender moments of puzzled contemplation to noisy but controlled chaos which sounds like flexing while howling at yourself in the mirror feels. I should probably mention some bands, because while musicians are special snowflakes whose creative vision evades comparison, this does a better job of interesting people than the vague imagery and fannydangle present in the previous sentence. I think you will like Poino, likewise their debut LP ‘Moan Loose’ (check it on their Bandcamp), if you enjoy bands such as SHELLAC, US MAPLE, UZEDA, OXES and BILGE PUMP. Stuff that sometimes gets called ‘math rock’, but is played by people who obviously know and enjoy rock, and who don’t wear (metaphorical or actual) polo necks.


This is also a perfectly OK description of BRANDYMAN, who are this bill’s ‘local band’, and who are looking forward to a fruitful and productive 2013 where they play lots of gigs (short of overkill) and hopefully get some shit recorded. If you are reading this upfront of the gig in question, you probably know who they are, so you should come and see them and play air guitar while doing the drinking bird dance. Or maybe that is just me. Ben the guitar player’s birthday is the day before this gig, so that is another reason to raise your tankard. .


Opening the show are BRATAN. A young but exciting duo from Manchester, their guitar-drums-no-vocals steez is highly austere and sparse, bordering on industrial at certain points – but they have a way with atmosphere and unease that will hopefully cut through the first floor of a city centre bar at about 8.30pm on a Monday. They, like the other two bands on the bill (to an extent) have a “90s kids will remember this” vibe – as well as Slint and their extended Louisville friends and family, I get strong echoes of A Minor Forest out of Chicago. This might have been aided by me pulling out the album the above track comes from last week, for the first time in years, but even so.


In conclusion, although this lineup might carry echoes of Mr. Shellac, attending it will not make you an “unbelievable prick”, if anything the exact opposite. A believable twat. Uh, this takes place in Cardiff’s Buffalo venue, is a fiver on the door and should be done by 11pm, once all the bands have finished “kicking ass” and “taking names”.