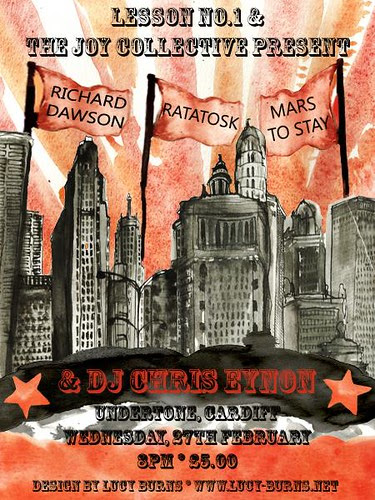 Lesson No.1 and The Joy Collective, the twin promoters of this gig – hold on to your hats, for I am arrogantly about to speak for them – like plenty of music which is quiet and delicate and minimal, yet we do not often put it on. Is it because we worry about our public personae seeming less tearingly rock’n’roll, or because we think that the people who come to our gigs (Sid and Doris Bonkers) are going to talk over the music and ruin the intimacy? Instead of answering this question, let’s just say (a) the most rock’n’roll thing you can do in this postmodern age is make no effort at all to be rock’n’roll; and (b) when you attend this three-act gig, FUCKING SHUT UP WHILE PEOPLE ARE PERFORMING.


RICHARD DAWSON is a folk singer from Newcastle, on what I believe is his first UK tour, or at least his highest profile one. He has been releasing music since 2005, mainly on CDR and in very limited runs. He sometimes sings a capella, with an unmistakable north-eastern accent and a highish pitch lending an air of near-innocence, but more often accompanies himself on electric guitar, with weird tunings and claw-like picking.


With the exception of Cath & Phil Tyler and Tom Waits, his influences (as stated on his Facebook page) are the reddest of herrings as regards what he sounds like. On ‘The Magic Bridge’ – released on CD in 2011, vinyl last year and fairly unquestionably his masterpiece to date – there are elements of (or things that remind me of) traditional English folk, Delta blues, Middle Eastern guitar music, ultra-loner six-string minimalism a la Jandek, Will Oldham’s more messed-up stuff pre-Bonnie ‘Prince’ Billy... but before I drift off into a paroxysm of namechecks in place of any astute observations, let me say that it is properly compelling and weirdly FUN. When I caught a bit of his set at the Supersonic Festival, he told jokes and that in between songs, and kept what I imagine was a near-universally hungover crowd rapt despite being not-loud. Just saying.


In the middle of the bill is RATATOSK, the name Cardiff/Bargoed-based Rhodri Viney uses when he is performing solo, a thing that is happening for the first time in 2013. Eschewing the guitar for this show, although he can often be found coaxing exciting noises out of it (e.g. in Right Hand Left Hand), expect to see a musical saw, zither and loop pedal employed. I think. Might well be something new in the arsenal. He also threatened me with a set of improvisation if he didn’t find the time to rehearse his set, but I countered that this was no threat at all. Like Dawson, Ratatosk’s home-recorded music rewards close listening , and being quiet.


Opening the show, probably about 30 minutes after the 8pm doors, are MARS TO STAY, who are playing their first show for L#1 or TJC (acronyms are suave) and don’t play live enough, IYAM (if you ask me). They have been going a hair over two years and play slowcore/sadcore – is there a difference? – with levels of reverb that would drive the vicar to burn his own church down. I am going to repeat, for the second time including the Facebook event page, someone’s description “Red House Painters trapped in a big metal pipe”. Hee hee. I have also been reminded of Codeine, Grouper, Movietone and The For Carnation to one degree or other. Suffice it to say they deserve your UNDIVIDED ATTENTION.


This gig is in Undertone, which we figured was the venue that makes it the least easy to stand ignoring the bands, and costs a fiver on the door. Chris Eynon will be playing pre-recorded music between the acts, which may even be things appropriate to the occasion if he feels generous in that way. The entirety will warm your cockles and bulk your mussels.