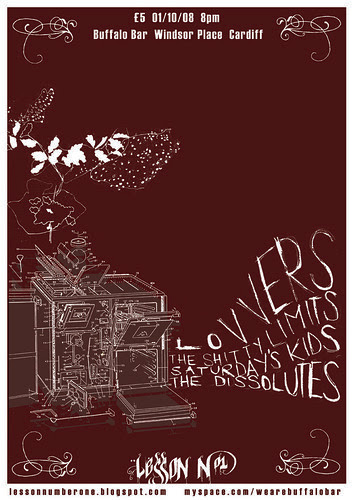 It's been a long (not very hot) summer without Lesson No.1 in the house - elongated by Racebannon postponing their tour to later in the year (look out for a new date soon hopefully). But like students and leaves falling, we're back for the autumn, on Wednesday 1 October, in fact, with this little beauty...

Lovvers are, quie possibly, the hardest-working band in Britain. Since forming in 2006 (from the ‘ashes’ of The Murder Of Rosa Luxemburg and Kamikazee), the noisy Nottingham lads have toured like there was a maniac threatening to blow up their van if they dropped below 30 shows a month. This will be their first headlining show in South Wales, having previously supported Brutal Knights, Los Campesinos! and I Was A Cub Scout. Three seven-inch singles on the Jonson Family label, 'Think' mini-album/EP soon-a-come on Wichita. Fuzzed-out, sharp-edged proto-grunge style ramalama for fans of early Nirvana, Mudhoney, Wipers kinda thing - listen!

The Shitty Limits: Britain's second hardest-working band. Debut Cardiff show for Guildford band who have also put out three seven-inch singles (in under a year; a fourth should be out by the time of this show) and caused people to fall in LUV. They do crazy fast crazy short songs that sound like bits of ‘Pink Flag’ by Wire meets early US hardcore, and longer, not as fast songs that are more 60s garage punk meets Billy Childish-type monomania. All of it is rad and you can hear some evidence here.

Saturday's Kids are one of the newest punk bands from the hamlet of South Wales. But if you ask us (which you didn’t) they're gonna be one of the best if they keep it going like they started. “Sounds like a guitar being beaten by a hammer,” they say. Enduring image. You probably want to have some names listed though. Patience! Pissed Jeans, slow-era Black Flag, Scratch Acid, Fang; in other words, grimy feedback rawk. Catch an earful.

The Dissolutes are from from Worcester and are pals of Lovvers, who asked if they could support as they had a cool thang going on. Went to their MySpace and had a listen, as is the modern way. The tracks are taken from a video of their first gig so you can probably imagine what the sound quality is like, but if you like garage and raw 60s rock (The Kinks and The Sonics through to Crypt Records bands to the Black Lips et al) this is some good eatin’! So we said “yeah sure” to Lovvers and that pretty much takes us up to where we are now, with you reading this stupid waffle. Take time out to check 'em out.

The nitty gritty, you say? Sure: it's at Buffalo, Windsor Place, Cardiff, from 8pm, and it'll set you back a cool £5.

Oh and while you're here, look right for a few new upcoming gigs, including Lesson No.1's rather awesome contribution to the Sŵn festival. Might not have been a baking summer, people, but it's going to be a pretty HOT autumn/winter. Oh yeah.