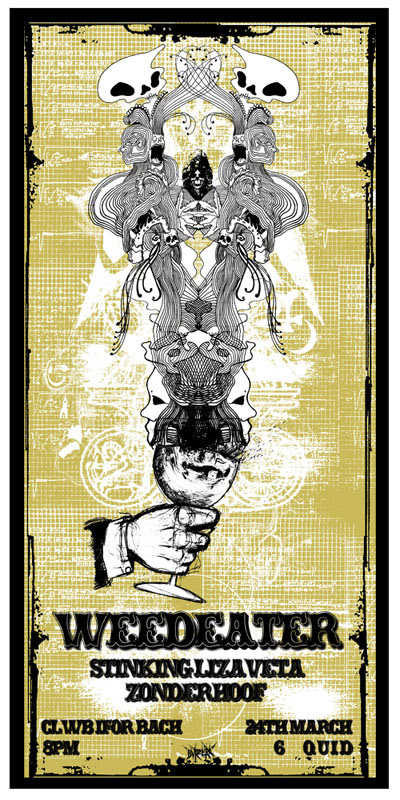 There's every chance if you loved the wonderful Anni Rossi last month, aka the previous Lesson No.1 gig, you might prefer to syringe your own ears with a carving knife than check out our next instalment of noisy fun. Because this month (Monday 24 March, that's Easter Monday, to be exact), ladies and gentlemen, we slow it down to a crawl of sludge rock...

Weedeater are heavier-than-you swamp sludge metal from North Carolina, formed in the 1990s from the acrid ash of Buzzov-en and continuing that band’s commitment to downtuned, crawling doom ugliness. Their latest album, ‘God Luck and Good Speed’ (awesome title) is on Southern Lord and will please fans of Eyehategod, Iron Monkey, Crowbar and possibly glue sniffing. So will this show, we expect. Look out for potential mid-set vomiting too, incidentally. Get tuned down over this way.

Stinking Lizaveta have played in South Wales three times. The first two times we put them on and they killed it in a small room. The other time they supported Corrosion Of Conformity and Clutch and killed it in a huge room in front of hundreds of people who had pretty much never heard of them. They come from Philadelphia and have been going since the 1990s, touring ferociously and unleashing their technically dizzying, double bass-using brand of instrumental, jazz-informed doom rock every so often in album form. Releases on Monotreme, At A Loss and Joe Lally of Fugazi's Tolotta among others. Doom-jazz in your face here.

Zonderhoof have been around Cardiff for a couple of years now and have started to get the props they deserve, thanks partly to a debut EP released by Sound Devastation but thanks mainly to being a really rad band. If you like Melvins, Keelhaul, the first Pelican EP, Hey Colossus and the like, don’t have that extra rock of crack before leaving the house – turn up early. And if you don't trust us, listen.

Where is all this ear-breaking debauchery going down? Downstairs at Clwb Ifor Bach, Womanby Street, Cardiff. Action starts from 8pm, it's £6 in advance (TICKETS) or £6.50 on the door. So round your bank holiday weekend/celebration of the death and resurrection of Jesus Christ (delete according to delusional demeanour or otherwise) in style, okay?