dea Lesson No.1: DO NOT IGNORE THE POTENTIAL

DO NOT IGNORE THE POTENTIAL 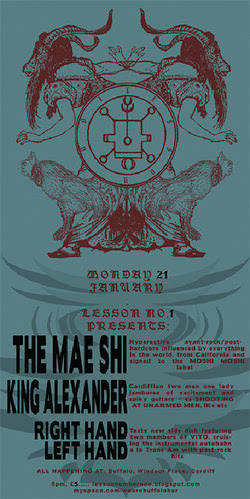 Self-congratulatory backslapping ahoy: from the moment David Yow threw his mic stand into the crowd and demanded everyone took several steps back (then picked it up and beckoned them all forward again) how fucking awesome were Qui? Very, that's how. Best Lesson No.1 gig ever? Maybe.

But the internets (copyright Mr H Rollins) doesn't shut down for Christmas, so time for a bulletin on our next gig that won't be, MySpace-stylee, sent at you every day, twice, all in upper case and with spelling that makes your eyes feel like they've been jabbed with pointy razorblades.

Our first show of 2008, the next episode of fun-based noise (and vice versa) is on Monday 21 January and will go a little something like this...

The Mae Shi playfully throw out hyperactive avant-rock/post-hardcore influenced by everything in the world. They once released a mixtape with 1200 songs on it. From California and signed to the Moshi Moshi label in the UK, their new rekkid, 'HLLLYH', is due around the date of this show and, for the label in question, is fairly out of left field. So don't be put off. Previous releases, on imprints like 5 Rue Christine, Strictly Amateur Films and Narshaada, include a quite awesome split LP with Racebannon's 'other' band, Rapider Than Horsepower. For snatches of 'HLLLYH' and whole lot more get listening right here.

King Alexander are a Cardiffian two man/one lady jamboree of excitement and spiky guitars. Ex-Shooting At Unarmed Men, International Karate Plus and Mo-Ho-Bish-O-Pi (although a different member of the latter two bands than previously detailed below in Heck, fact fans), plus you may have seen frontlady Laura performing solo as Le B. New material soon; for now ears can be rewarded this way.

Right Hand Left Hand are a tasty new Cardiff-based side dish featuring two members of Vito (and by extension several other bands, thanks mainly to Rhodri ‘Broken Leaf’ Viney featuring). Squirreled away "experimenting with loops and random instrument swaps" for some months now, this is scheduled to be their second ever show, cruising the instrumental autobahn a la Trans Am with spacey post-rock bits. Get clicking for their first brace of tunes.

Where is this all happening? Buffalo, Windsor Place, Cardiff. What time? 8pm. How much of your hard earned will it set you back? £5, yo. Most jobs pay more than that in an hour, right?