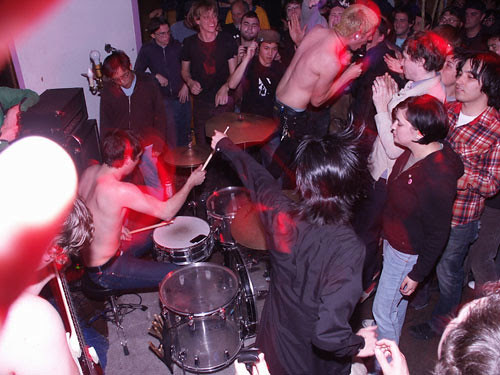 People don't talk about the pop-cultural impact of the Backstreet Boys very much. You might think this an obvious point, but every absolute truth in fact has an honourable exception if you look hard enough. In this case, there are a few. The one with the hair was hilariously addicted to prescription drugs and shagging groupies up the tradesman's entrance, for one thing, and that video they did that was like a cartoon haunted house was sort of awesome. But the best thing the Backstreet Boys, or one of them, did was ram the back of a car one day and pay its owner a big compensatory wad - thus allowing the owner, Dean Spunt, to finance a 7" by Wives, a brilliantly unhinged and discordant LA punk rock band for whom he sang. This was the beginning of a rocky road of shitloads of US gigs with bands like Lightning Bolt, THEUSAISAMONSTER and Wrangler Brutes: bands who, like Wives, have dunked their head in the skanky well of infant American hardcore but mangle the template in varied and dizzying ways. If you like the Minutemen, The Germs, Big Boys (whose 'Fun Fun Fun' they cover on their debut LP,'Erect The Youth Problem', Born Against, Rapeman or Killdozer, you might have a wet patch for Wives. Expect from their Clwb Ifor Bach show on Oct 10, then, what we're forced to call 'the unexpected'. Suffice to say it's the sort of everyone's-a-performer maximum smashism that will unquestionably benefit from being in Clwb Ifor's marvellous new downstairs venue, where the bands are smack in front of you, a stage but a madman's dream, and escape is IMPOSSIBLE! Hear some Wives here

Also bringing the jams: South Wales' Night & The City Of Broken Promises, who bring together extensive, almost dubby post-rock and chaotic emotional hardcore like someone should have done in 1994 but didn't (imagine if Mohinder and Bark Psychosis had met one hot sexy night). A bass-shaped absence in their camp is filled by the able hands of Jim from The Take. Superhero! King Alexander, who have a self-released EP in a purty sleeve that is in our useful and influential top 10; we should have put these gents on ages ago, what with their bendy structures built from lo-fi punk, spotwelder math-rock and spirit-of-93 riot grrrl. And An Emergency, a fresh product of the more-fertile-than-you-probably-know Exeter punk scene who take inspiration from Les Savy Fav, Sonic Youth, Hot Snakes, Ex Models and the like - see here for some kind of proof. Winter is looming and you are going to SWEAT.