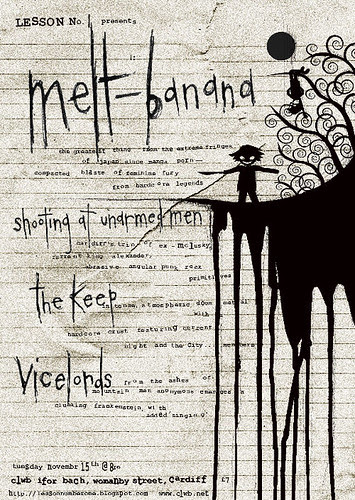 Brutalist noise-rockers Melt Banana need no introduction, but then we'd have nothing to write and that would be a tragedy, so here goes. Born in Tokyo in 1993, MB - that is, vocalist Yasuko Onuki, guitarist Agata, bassist Rika Mm', and drummer Sudoh Toshiaki - have built a reputation as one of the most inspired and idiosyncratic bands in experimental hardcore, crafting futuristic, 90-second noisescapes characterised by shrill vocals and demanding, complex dynamics. 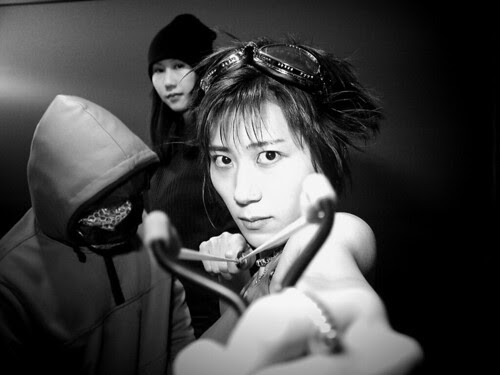 A fine website called Ink 19, meanwhile, put it thus: "No wave without the self-conscious pretension, avant-garde composition compressed into one-minute-or-less bursts, urgency, intricate destruction, pure glorious abandon. MELT-BANANA play the same way that Repulsion, Naked City, The Ruins, or The Boredoms all make you want to scream and dance and kill your neighbors. This is not music that we are conditioned to accept. This is you delirious with joy scraping your five senses off the floor." Hear an MP3, 'Rough Dogs', here

Also on the bill: Cardiff's Shooting At Unarmed Men, aka Mclusky refugee J.Chapple, sometime King Alexander minion Simon Alexander, and a gentleman called Mogs, who drums. Jon has already called this "support slot of the year", although they haven't yet put it in their gig listings, suggesting they're just being kind and they're not that bothered at all. The Keep: a relatively new band who can mostly be found lurking around the South Wales Massive forum - this tendril of the Lesson No.1 empire must confess he hasn't heard them, but Noel Lesson No.1 said nice stuff about Isis and Pelican, so heads up for that. And finally, Vicelords - a wild card by anyone's stretch of the imagination, it's their debut gig, it involves Adam who used to play bass in Mountain Men Anonymous, and if promises become reality, it's going to get right in your face and fuck with you. Anyway, this all takes place November 15th at Clwb Ifor Bach, and tickets are available now from Spillers and the University box office.

Lesson No.1 are also preparing to begin a monthly residency at the Buffalo Bar (formerly BSB on Windor Place). There will be loud music, and an occasional music quiz, which will be hosted by Gindrinker's DC Gates. We need a name for the bugger, though. If anyone has any ideas, email them to us. There's a litterful of puppies up for grabs.

Where is my beer?

Sounds fucking wicked bre. Melt Banana is a great band. Good to see you fellas hosting this kind of music in Cardiff.