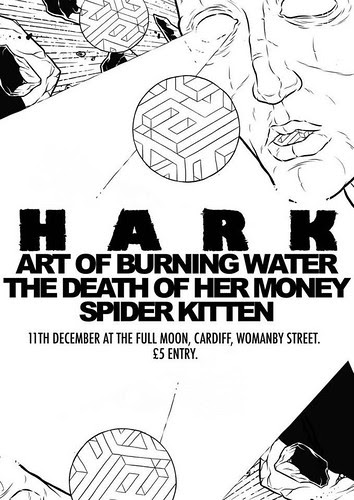 The title is an entirely spurious pun on this 90s rave classic. If you listen you will surely agree with MrPirulo74 when he says “PARA SU EPOCA ES LO MAXIMO EN ACID”. With that out of the way, however, it’s time to forget about those ‘cheesy quavers’ and their ‘computer music’ in favour of a massive four-band bill of rock music that is thoughtful and sometimes complex, yet also rocks. And is also on Tue 11 Dec, which is tomorrow (at the time of writing this)!


Headliners HARK are playing in Wales for the first time, but are in effect a ‘Welsh band’, in that they feature three Swansea natives: Jimbob Isaac, formerly of Taint, and Nikolai Ribnikov and Simon Bonwick, who used to be in Whyteleaf. If you paid much attention to rock and metal from the principality in the last decade, you probably know who Taint were – they had two albums and a few EPs etc on labels including Rise Above, Household Name and Superfi. They also ruled hard. Whyteleaf, while not quite having the same recognition factor, had a nice line in timelessly lithe hard rock with shades of Thin Lizzy and Soundgarden (if my ailing memory serves me). Both bands called it a day around two years ago, and Jimbob – now living in Bristol – started kicking round new band ideas a few months after that.


By August 2012, this had progressed to a debut Hark record: ‘Mythopoeia’, a two-song seven-inch released by the aforementioned label Superfi (plus Destructure, who put out the last Taint EP). It seems to be sold out from the label, but you can probably find a copy if you hunt around, or you could just listen on the link above. It’s great! Recognisably akin to Taint, but not the same as them, it has bags of ‘groove’, that indefinable quality, and a poppy lightness of touch that offsets the downtuned sludginess. Based on my one time seeing them play to date, supporting Harvey Milk in May, Hark bring it live as well. As such I implore you to bring yourself to the Moon Club.


Not least because you will also get treated to a set by the large and in charge ART OF BURNING WATER, who arrive here as part of a UK tour. I think the last time they played here was something like 2006, since when they’ve recorded three more albums of vicious and deadly metallic noiserock. The latest one, ‘This Disgrace’, is hopefully going to be for sale when they turn up, but even if it’s not you can still get hyped by listening to two preview tracks here! How GNAR do they sound, right? It’s released on the aforementioned label Superfi, like their other LPs, and they now have Kunal, who runs the aforementioned label Superfi, playing bass for them. Recommended! If! You! Like! Today Is The Day, Voivod, Melvins’ fast numbers, mebbe High On Fire.


Plus two auld faithfuls from the region in the form of THE DEATH OF HER MONEY and SPIDER KITTEN. Both of them have lots of new material to play – in the case of Spider Kitten, they just the other day released it; check out ‘Cougar Club’ on the Bandcamp – and both of them will be slow and loud and all that jazz. I can’t believe that this is only A FIVER ON THE DOOR, really. You should pay more!


This is the last show that Lesson No.1 has its name attached to this year, so cheers to Kaskie from TDOHM who did pretty much all the booking etc for this gig. Also the other people whom I have done shows in a rainbow coalition with in 2012. And the bands, people who attended, and so forth.