dea Lesson No.1: BENEATH THE CRUST 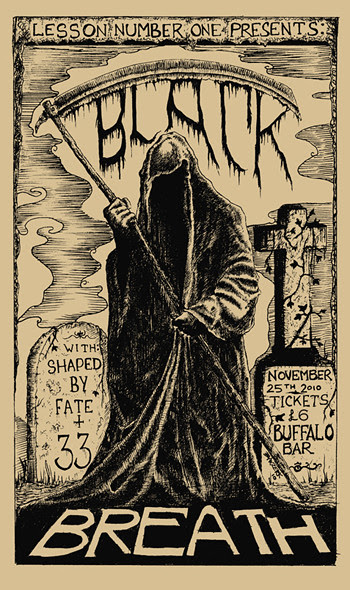 Congrats all round to everybody we put on at Swn, tearing good three days on the Lesson No.1 front right there; watch out for more of the same next October.

Thankfully you don't gotta wait that long for the next Lesson No.1 gig action, coming YOUR WAY on Thursday 25 November and we're properly counting off the days until this one...

Black Breath are incredible, incredibly raging bulldozer metal godliness from Seattle, featuring (ex) members of Shook Ones, Go It Alone, Blue Monday and other bands they don't sound like. On their two releases to date - 2008's 'Razor To Oblivion' EP, re-released last year by Southern Lord, and 2010's Kurt Ballou-produced debut album 'Heavy Breathing' - they mash up old skool Swedish death metal, crossover thrash, Japanese hardcore, crust and a bunch of other ish. Dirty and hairy but also impeccably focused. If you like metal, don't even think about missing this. MySpazz evidence is over here.

Shaped By Fate turn in a rare-ish hometown show, having spent much of 2010 writing and recording their second full-length album. We're pretty sure it's going to bang. They take influence from nasty hardcore, nastier metal and helpfully enough nasty metalcore (the sort that is good and doesn't have dayglo merchandise) and their shows tend to be mad lively. You may already know all that but if not get an aural taste.

33 are also making a fairly rare South Wales appearance. They started in Swansea and are now also based in Brecon and London. They feature current and ex-members of a bunch of bands, notably Captain Insano, Ironclad, Save Your Breath and Dukes Of Nothing (Tony Sylvester, their newest member, used to be in the latter. Anyone see DoN with Scissorfight in Swansea? That was great). They play fast and uncompromising hardcore nodding to the early 80s New York and Michigan scenes, among others. Respec' knuckles for having only one 30-second song on their MySpace.

Other things you need to know: this is all happening at Buffalo, Windsor Place, Cardiff, 7.30pm doors (with an early-ish curfew as interesting dubstep dude James Blake is playing the clubnight afterwards). Tickets are £6 adv from this link here and £7 on the door.