dea Lesson No.1: MAN VS HORSE 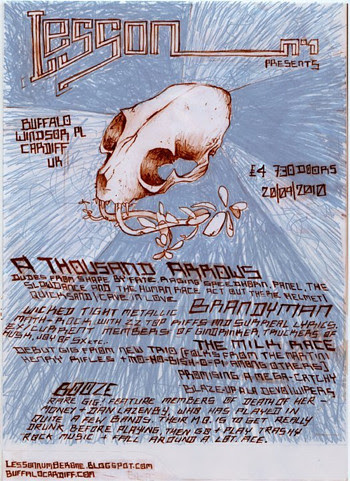 Do you believe in curses? The swearing variety we'd be fine with; the curse of bad luck isn't so much fun, but it's been following Lesson No.1 shows for a while now. The latest example: our next show, on Monday 20 September, will be minus original headliners Racebannon, who've postponed their tour until early 2011. Sucks. But it takes more than that, as ever, to stop the rock round here, so...

A Thousand Arrows are newish but building a rep day by day, providing an outlet where dudes from bands you know – Shaped By Fate, Raging Speedhorn, Panel, The Slowdance, The Human Race – act out love of (mostly) 90s bands like Helmet, Snapcase, Quicksand and Cave In. Solid metal riffs, cane sugar melody, as you can hear over here.

Brandyman are dudes ex/current of other Cardiff bands – Truckers Of Husk, FTSE100, Joy Of Sex, Gindrinker – plus, in the case of the drummer, the acting profession (non-standard Lesson No.1 link posing as evidence). Brandyman have been active since the start of the year and play wicked tight math-rock with ZZ Top b(l)ooze riffs and lyrics to make you giggle, and think. Take a sip.

The Milk Race number three and have served in these bands. Ready? The Martini Henry Rifles, Space In The 50s, Mo-Ho-Bish-O-Pi, The International Karate Plus and Nameless. So they are old hands in the realm of indie-rock and punk and garage and sweating. They purport to be influenced by Devo and The Wipers this time out, which gets our vote. This is, we believe, their first gig, so for now there's only one piece of recorded evidence online here.

BOOZE are legends in their own liquid lunchtime who have manfully stepped up to open this show. Featuring Dan Lazenby, who has played in quite a few bands as well as designing the fine head-wrecking poster above, plus members of The Death Of Her Money, their M.O. is to get really, really drunk before playing trashy rock music and falling around a lot. Ace. No links that we know of: they're too busy downing whiskeys to worry about such trivial pursuits as websites/MySpaces. Probably.

As usual, this is where the details land: this is all happening at Buffalo, Windsor Place, Cardiff, 7.30pm doors, a bargain £4 on the door.