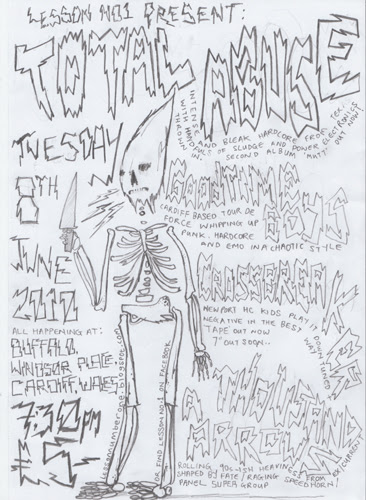 ***************
UPDATE #2: Total Abuse's tour fell apart in Germany, and they haven't made it to the UK. If you care you can have a look around online you'll find a load of bored idiots talking about it. We were going to carry on with the three bands plus one more TBC, but no-one we asked could fill in at that short notice, then Crossbreaker had to pull out too so we said nuts to it - there didn't seem much point having a gig with two local bands who play quite often as it is. Sorry to disappoint anyone who was looking forward to this...
***************

We're fast approaching Lesson No.1's traditional self-enforced summer break, but we're not done just yet. First up, get some of the below down your throats this coming Tuesday (8 June).

Goodtime Boys are a Cardiff-based tour de force whipping up punk, hardcore and emo in chaotic style (although they're not big fans of either of the first two genre terms, according to a recent interview). Features Pennie of Decimals note in the frontman role. Lots of movement guaranteed. Have a, err, goodtime here.

Crossbreaker are Newport HC kids playing it downtuned and negative in the best way. They have a tape out now and a 7” following on the Purgatory label. They did a shirt that was a homage to Crossed Out, so you know they're all right, okay? Sounds this way, unless you'd rather read their up-to-the-minute views on the world in modern technological form over here.

A Thousand Arrows complete the evening's fun via rolling 90s-ish heaviness a la Helmet, Quicksand, Snapcase, yadda yadda. They're something of a SUPERgroup in all meanings of the word too, their squad featuring ex/current Shaped By Fate, Raging Speedhorn, Slowdance and Panel bods. This will be among their first shows. Get an upfront aural taster in your ears.

The small print: this is all happening at Buffalo, Windsor Place, Cardiff, from 7.30pm, a bargain £5 in, oh yes.