dea Lesson No.1: GRAVY AND BLOOD 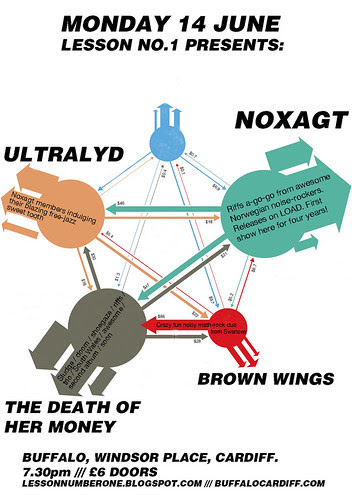 So, that Total Abuse show was closer to total fucking disaster (it was eventually cancelled, through no fault of Lesson No.1's, sadly). But the rock doesn't stop round here. Well, it does, actually, for a couple of months, but not until after this ear-splitting Load Records extravaganza on Monday (14 June).

Noxagt are awesome Norwegian noise-rockers with riffs-a-go-go. They've released a bunch of records on the aforementioned Load (among lots of others) and this is their first show here since four years ago when they tore Clwb Ifor Bach a new fire exit. Feel the noise right here.

Ultralyd are touring with Noxagt for a few of their dates. Which is probably a fairly simple arrangement as Ultralyd are basically Noxagt members indulging their blazing free jazz sweet tooth. Can't argue with that two-for-the-price-of-one Scandinavian logic. Also made sweet music in recorded form via Load. Have a listen why don't you?

The Death of Her Money are, at risk of repetition, simply one of the UK's finest metal bands. Summed up in an array of seemingly random words: sludge / doom / shoegaze / riffs / trio / South Wales / awesome / second album / soon. One of their greatest songs is called 'Scandinavian Accent', don't you know, so here's hoping TDOHM try out their best Norwegian impersonations during this show. Or not. As the case may be. You can hear that and other pop delights over this way.

Brown Wings are another set of Lesson No.1 favourites, a crazy fun noisy math-rock duo from Swansea region for those who dig Lightning Bolt, Pink & Brown, etc. No let up in the volume here, then. Check the evidence.

Important details: this is all going down at Buffalo, Windsor Place, Cardiff from 7.30pm, £6 on the door. Thanking you.