dea Lesson No.1: COUNTING DOWN THE HOURS

COUNTING DOWN THE HOURS 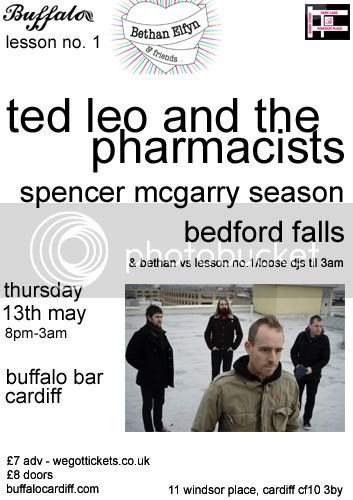 As Britain moves into uncertain political times, it seems a fine juncture for Lesson No.1's latest extravaganza this coming Thursday (13 May), in association with Loose and Bethan Elfyn.

Ted Leo & The Pharmacists are in town for their first Cardiff show since 2003. Hardly anyone attended that last one. But since then American punk rock veteran Ted (Citizen's Arrest, Animal Crackers, Chisel) and his band of tunesmiths The Pharmacists' collective reputation has mushroomed. That's mainly thanks to countless awesome, memorable songs packed with social commentary and encompassing punk, new wave, mod, hard rock and folk. He’s a proper indie celeb in the States, thanks to releases on Lookout, Touch And Go and Matador (new album 'The Brutalist Bricks', out now) and is going the same way over here. We have wanted to put him on since forever so this is kind of a big deal. Nice cross-section of tunes this way if you please.

Spencer McGarry Season were on our notional list to support Ted Leo when we made (fruitless) inroads into putting the latter on a few years back. The grounds: he made killer post-punk/powerpop type tunes a bit like a Cardiff answer to Ted. So we booked this show, then heard his new album, ‘Episode 2’: amazing pop-orchestral mini-epics coming in at almost 70 minutes, in a Gershwin, Tin Pan Alley or Randy Newman style, with a new wave/punk sensibility peeking through. Which is pretty different, but still great, and with about a million (okay, nine or ten) people onstage, pretty watchable. Some examples of his new steez.

Bedford Falls are another band we've wanted to put on, yet failed thus far since we started putting on gigs. Shocking! If you’re not familiar with them, they’ve been making country-drenched punk rock tunefulness – for fans of Husker Du, Buffalo Tom, Lemonheads, etc – in and around Cardiff since 2003 or so, with releases on Boss Tunage, Newest Industry and Rat Patrol. Tom, the main songwriter in the band, was as keen to play this show as we were to host them, so that worked out nicely. Take a trip to Bedford.

What else do you need to know? Well, all of this and more (with DJs until late afterwards) is at Buffalo, Windsor Place, Cardiff, doors 7.30pm. Tickets are £7 plus booking fee if you get them RIGHT HERE or £8 on the door. Sold a good number of tickets too so advance buying is at about a code amber right now. Looking forward to it.

(Incidentally, that poster up there was due to be a temporary one, but a planned proper design fell through. Back to normal service next month with a fine scuzzy effort for Total Abuse, though, never fear...)