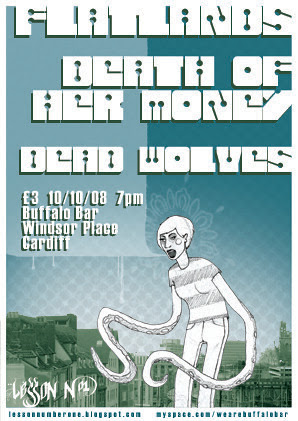 Thank you one and all who came out to see Lovvers last week. Everyone who played who was supposed to - Lovvers, The Shitty Limits, Saturday's Kids - were great, but special mention to Crimesss who stepped in at a moment's notice to fill in for broken down car victims The Dissolutes.

Next up, we're giving a few friends - namely FYB (fairly sure that's the polite version of Fuck Your Band) and Suntreader - put on this little ear-breaker, on Friday 10 October. That's THIS FRIDAY, for anybody who can't work out that you get a calendar if you double click the time on your computer. Okay?

From Sheffield, Flatlands vomit out slow, lumbering slabs of solid rock along the lines of The Human League, Arctic Monkeys and Def Leppard. There's probably a 'LOL' in there somewhere. Just kidding: try Neurosis, Isis, the Melvins and Breach for size instead. Releases on Superfi and Sound Devastation, yo, and sounds right here.

The Death Of Her Money: riffs, pedals, repetition, delay, sludge, feedback, metal, shoegazing. These are some words we have used before when writing about TDOHM, a trio (with fresh lineup and everything!) from South Wales who everyone in the world should really admit are awesome. They, like Flatlands, have a release on the Superfi label (debut album ‘Spirit Of The Stairwell’). They will complement them, and compliment them too if they play well. Some musical evidence for your ears.

Dead Wolves turn in a rare Cardiff show, a decibel-emitting lot who might legitimately term themselves “the heaviest band in Swansea”. Extreme doom with electronics, drones and downtuning like you wouldn’t believe, son. For fans of Unearthly Trance, Khanate, Moss, Swans and the like. As this should prove.