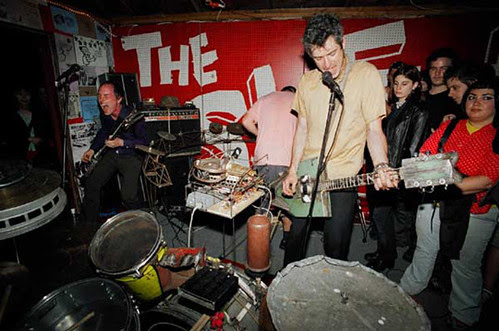 Boston trio Neptune could teach you a thing or two about DIY. And industrial. And hardcore. Sculptor-musicians, over the period of about ten years, they've built their own musical equipment out of scrap: bike wheels, radiators, bits of cars, saws. One of their guitars weighs about 50lbs. No messing. Over time, however, they've hammered their sound from a clangerous Einstürzende Neubauten racket into a noirish avant-rock racket that points to Shellac, Gang Of Four, This Heat, and in the quieter moments - which are typically rather brief - none other than Slint (listen out for 'Spiderland' homage 'A Little Spider'). Or right now, actually listen to the track 'Bro Bounce', using your real actual ears. It's that easy.

Anyway, being of an artsy bent, Neptune are the band joining Lesson No.1 to pop our Chapter Arts Centre cherry. Chapter's only about 15 minutes walk from the centre of town, if you're one of those Roath dwellers, so don't sweat it. It'll be fine. And it's this Sunday, kicking off at 7pm, with tickets retailing for £5. Support on the night comes from South Wales’ finest shoegaze/dreampop/smackdrone revivalists The Voices, two guys and a lady offering total drone blissout a la Spacemen 3/Jesus And Mary Chain/My Bloody Valentine. They've an album out on My Kung Fu this month, so keep an eye out. And also, Bologna Pony, a Nottingham ultradrone duo who are a spinoff of cool post-rock band Souvaris. They create improv guitar pieces out of feedback, drone etc – think Sunn0))) or Glen Branca. Listen to a bit here. And then come to the show. Come on. Be brave. Bring a beret.

Where in the Arts Centre is this going down? - Don't fancy gatecrashing some experimental action art or a 4 hour film about a young mans sexual awakening in search of your show.

It's in the upstairs studio - the nice people behind the bulletproof glass should be able to point you in the right direction. Meanwhile, between bands, members of the Lesson No.1 promotion team will perform a number of experimental art actions dealing with a young man's sexual awakening. Said performances may include graphic scenes of nudity, and the boiling of an Ostrich's egg

have you thought about a season ticket to lesson no.1 shows? you guys are gonna bankrupt me.

If you ask him nicely, Simmo might be willing to get his fella out during the Bologna Pony set...