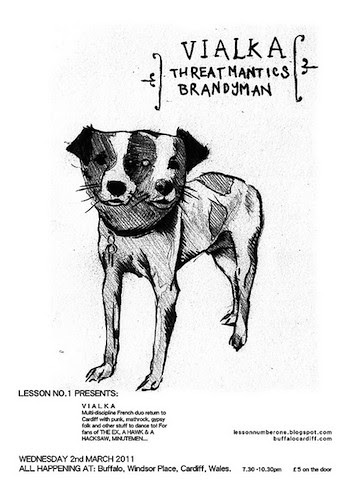 Great to see about a million people at Les Savy Fav (well, 300-odd folks selling The Globe out, at least). Onwards to the next Lesson No.1 gig, which is this Wednesday (March 2), bringing back some visitors deep in our gig putting-on past...

Vialka make a thoroughly welcome return to South Wales. We put on this multi-discipline French duo back in the dark ages of 2005 and 2006. A lady, Marylise, plays frenetic drums; a gentleman, Eric, kicks out border-traversing punk rock guitar jams. There are jazzy math-rock bits, Eastern European turbofolk bits, some gypsy dancing (if yer lucky - seen 'em do it before) and Chinese-styled melodies from their time spent there. They are just TONS OF FUN. For fans of The Ex, Secret Chiefs 3, A Hawk And A Hacksaw, Minutemen, Sun City Girls. Hear them do weird things here.

Threatmantics play their first Lesson No.1 show, and with a bit of luck they're as stoked about it as we are. It's said by some people that bilinguals are just greedy, but that's totally unfair on the Threatmantics, a band from Cardiff who sing in English and sometimes Welsh, and have done so since the middle of last decade. They have releases on the Double Six, Ciwdod and AM labels and you can probably buy them somewhere. They tell great stories through the medium of punky guitar and screechy viola, like The Velvet Underground and dEUS and Gorky's did. They also now feature Graf from Gindrinker and many other bands. Take a listen.

Brandyman make a final hurrah before one of their number ups sticks to London. This is the lowdown, if you believe Brandyman's own biog: About Brandyman // Biography // Retired early had triple bypass enjoying life to the full // Location // Orkney Islands // Interests // Touring and photography // Occupation // Retired. What's definitely true is you can get hold of some cracking free tracks this way.

The important details, in a nutshell: this is all at Buffalo, Windsor Place, Cardiff, 7.30pm-10.30pm (early start and finish due to a clubnight afterwards), £5 on the door. You know you want to...