dea Lesson No.1: WHO ROCKS THE PARTY

WHO ROCKS THE PARTY 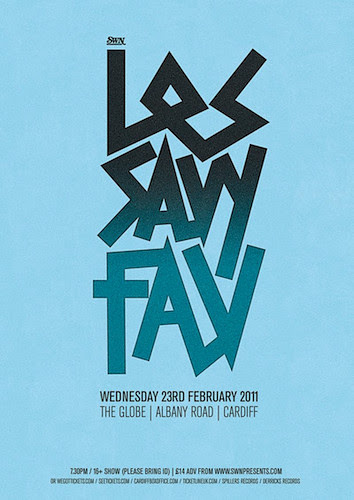 Every so often there's a gig possibility so exciting that Lesson No.1 would rather go in with some friends from round South Wales than see the band in question take their tour elsewhere. In past years, we've brought the likes of Lightning Bolt and Silver Jews to Cardiff aided by our departed compadres Forecast. Latterly, we've teamed up a good few times with their natural successors, Swn. And we come together again for this show detailed below, on Wednesday 23 February, alongside flux=rad.

Les Savy Fav are a band you don't quickly forget once experienced in the live environment. The Brooklyn crew ram art school smarts into spiky post-punk aesthetics, topped off with the poetic ramblings of bearded, burly frontman Tim Harrington over five albums and a bunch of incredible singles, EPs and compilations predominantly on Wichita and their own French Kiss label. But gigs are where things truly get interesting, Harrington a whirlwind of costumes, sweat and manic intent prone to invading the crowd more often than he stays onstage. The last time they played in South Wales, the best part of a decade ago, was a typically anarchic performance in Newport involving Harrington tying various onlooker to TJ's pillars with his mic cord. God only knows what he'll get up to in The Globe, but you probably won't even be safe on the balcony. Get an aural peek, if you don't already know, this way.

Young Legionnaire are LSF's tour support and current labelmates. Fused by a love of detuned guitars, maths formulas and volume, if you haven't heard of YL, you probably do know some of their past and current vehicles: the men in question are Gordon Moakes (Bloc Party), Paul Mullen (Yourcodenameis:milo/The Automatic) and some chap from La Roux's band. Education is available right here.

Truckers Of Husk are perennial Lesson No.1 favourites and complete the bill in their relatively new look incarnation, now permanently featuring Kelson Mathias of Future Of The Left/Jawcrew fame. We've lost count of how many occasions we've put them on, but the last time it was on a stage this big was opening our aforementioned Lightning Bolt show almost five years ago when they were but an itty-bitty baby of a band. Much has changed since then, as you can hear here.

All this is happening at The Globe, Albany Road, Cardiff from 7.30pm. Tickets, which cost £14, were still on sale at time of writing here but it seems there's every chance this will sell out before the night, so don't say we didn't warn you...