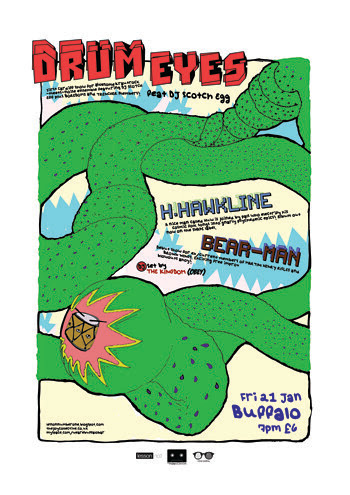 Let's dispense with the fact that this is actually being written in the dying days of 2010 and get to the sharp end: welcome to 2011, Lesson No.1 style. Well, technically, Lesson No.1 AND The Joy Collective style, linking up with like-minded fellow Cardiff promoters for our first show of the new year, on Friday 21 January, to be precise.

Drum Eyes get the two-oh-eleven off to a flyer. As regular attendees at our shows (Sid and Doris Bonkers) may know, we ♥ the man who calls himself DJ Scotch Egg and put him on all the time. We didn’t in 2010, but we start 2011 off with the first Cardiff show for his awesome Krautrock-meets-noise ensemble in which he plays his trusty Gameboys alongside members of other bands including Boredoms and Trencher. Live they are towering and hypnotic, yet also sunny and rippling. For fans of Boredoms, Fuck Buttons, Shit+Shine, Hawkwind and the like. Their debut album is out now on the Upset The Rhythm label. Audio evidence in this general direction.

H. Hawkline = a nice Cardiff-based man called Huw, who also plays in Means Heinz and Sweet Baboo's band, joined by pals, including Sweet Baboo himself. They electrify his cosmic instrumental folk songs into gnarly Kraut-ish psychedelic epics, as showcased on an LP called ‘A Cup Of Salt’, out now (in wicked limited numbers) on the Shape label. Get Hawk ish on your speakers here.

Bear-Man are a Cardiff-based trio who are playing their debut show. They feature ex/current members of The Martini Henry Rifles and Brown Wings, but don’t sound much like those bands. Exciting free improv guitar-drum-knobs blowouts are the name of the game – think, let’s say, Ultralyd, Aufgehoben, The Dead C, Sunburned... to kick you off. They have a cassette release coming soon on Cardiff’s rad Phantomhead label. Until then, get an aural mauling over this way.

Last but certainly not least, we welcome DJ action from The Kingdom of smart Cardiff night Obey keeping the volume levels up between bands.

The need-to-know nitty-gritty: all this is happening at Buffalo, Windsor Place, Cardiff, £6 on the door, and please take note of the times - 7pm to 10pm - as it's an early start and early curfew.

Oh, and while we're here, look top right of this page for the ever-growing list of (if we do say so ourselves) AWESOME Lesson No.1 shows upcoming in 2011. You can even buy advance tickets for four of them if you follow the obvious links (plus a special bargain dual combined ticket for our Liturgy and Cough gigs if you want to join us for two consecutive days of METAL!). Gonna be a vintage year, yo...

(And if you want a bit of a look back at the music that rocked our collective worlds during 2010, check two Lesson No.1-selected podcasts that are up now over here.)