dea Lesson No.1: AT WAR WITH GRINDCORE

AT WAR WITH GRINDCORE 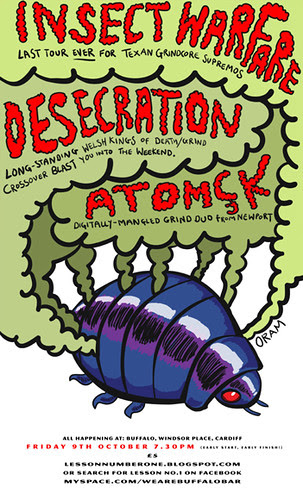 Once again the spectre of cancellation hits Lesson No.1, but even swine 'flu can't stop this virulent little bastard TONIGHT (Friday 9 October)

Insect Warfare are Texan grindcore supremos on the final tour ever and they're guaranteed short, fast and loud. They have product on Earache (their latest release ‘World Extermination’, which is actually a Euro reissue of a 2007 LP), Relapse, 625, Six Weeks and labels like that, which may give you an idea of what to expect – 100% raw, unfiltered blastbeat brevity with more than ‘nuff powerviolence and hardcore nous chucked in. They broke up in 2008 and then threw it together once more for this tour, so represent. Check the aural war right here.

Atomçk are a digitally-mangled grind duo from Newport for fans of Agoraphobic Nosebleed, The Locust, Pig Destroyer and various digigrind madmen. Mainly given to kicking out guitar/vox/drum machine mini-mini-mini-symphonies between 30 and 90 seconds long, sometimes they’ll switch it up and introduce some dragging sludge riffs. Split with Spider Kitten out now on their Sharp Noodle label. Sample their noise here.

Pus replace Desecration, who were forced to pull out last minute due to swine 'flu. Who is Pus and why would someone call themselves that? It's a two-guitar drone/doom/riff/noise duo, although can't entirely help you on the latter. They are a mega late replacement so we are grateful in equal megatude.

What else? Get to Buffalo, Windsor Place, Cardiff, 7.30pm doors (early start, early finish!) and hand us just £5 for the trouble. Perfect Friday night entertainment, we think you'll agree...