dea Lesson No.1: LIVE IN HELLSINKI 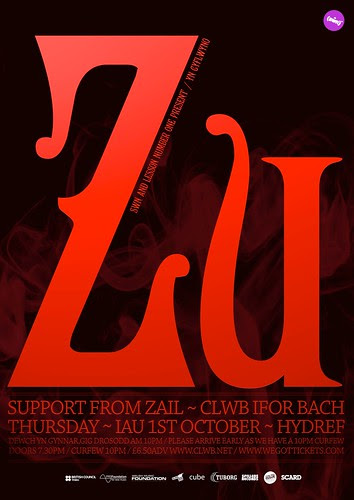 Anybody who caught Zu at the Invada Invasion in Bristol on Saturday (or Supersonic in Birmingham in the summer) will know this imminent Lesson No.1 delight in association with Swn ain't to be missed. Saddle up THIS THURSDAY, 1 October, then...

Zu are an Italian band who have taken time since the '90s to explore how and where jazz could meet hardcore could meet noise could meet metal could rock your face off. It's abrasive stuff as you might imagine, but life-affirming for real, and we've basically never known anyone to go and see them and not be hit for six. We put them on in 2004 in Le Pub, and they played in Cardiff a year or two before that. They were dope evenings, but sparsely attended. Don't make the same mistake, twits. Their new album 'Carboniferous' is on Ipecac and features Mike Patton and Buzz Osborne, the latest in their many collaborative ventures. Awesome band. Hear for yourself.

Zail = one guitar, one drumkit, some pedals and a storm of overdriven instrumental noise-skree racket. There are two people in Zail and they both used to be in Mountain Men Anonymous. They live in Cardiff and Gloucester respectively and haven't played these parts too much recently, so get involved (turn up early to do this). Listen here.

For all this fun and maybe more, take a trip to downstairs at Clwb Ifor Bach, Womanby Street, Cardiff from 7.30pm - there's a real early curfew on this one (10pm) so don't turn up for last orders and wonder what went wrong. And save two whole coins on the door price by getting an advance ticket for £6.50 here or here.