A LIVER, A LUNG, A KIDNEY, A THUMB

It's with heavy black hearts that we report The Paper Chase show this Sunday is OFF - John Congleton, vocalist and all-round lead Chaser, was rushed to hospital as the band were preparing to leave for Europe, so the entire tour has been pulled and will now be rescheduled later this year. Or in the words of their UK booker:

"John is in a bad state. He is out of hospital, but the tour has
been cancelled at this time."

Frankly, we blame whoever designed this sadly prophetic flyer: 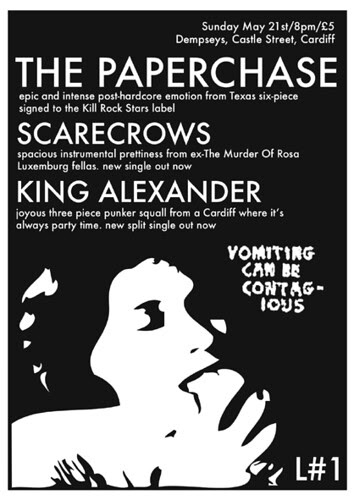 In other healthier news, the Lightning Bolt show on Monday is likely to sell out in advance, so if you haven't got tickets yet, a weekend purchase would be wise. We also hope to excitedly confirm one of Lesson No.1's total favourite bands very shortly too. Watch this space, as nobody with any shame says...