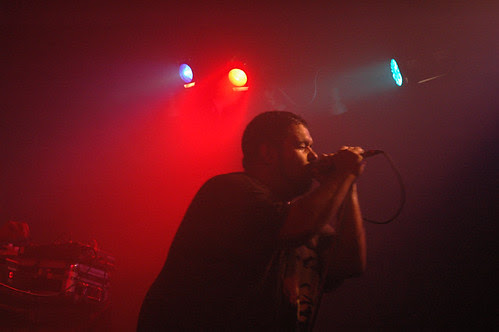 dälek is a band that's been around the world more times than most, playing shows and expanding minds since 1997. Quiet for almost a full year after constant DIY touring with such bands as Mike Patton's Tomahawk, ISIS, KRS-One, De La Soul, The Melvins, Grandmaster Flash, and fresh off of a landmark collaboration and release with Germany's krautrock legends Faust, dälek are back with their third and most sonically challenging full length to date, Absence. Expanding their sound and pulling from their influences, Absence recalls the best parts of Public Enemy and the Bomb Squad, the street poetry of KRS-1, the raw beats of Gang Starr and Mobb Deep, and the fearlessness of the avant garde, like Glenn Branca, My Bloody Valentine and Penderecki.

If only Hip Hop aged like wine –– where Public Enemy sampling Slayer while spitting lyrics for the "Permanent Underclass" had informed and challenged younger artists who were socially conscious and musically aware, then maybe in 2005 dälek wouldn't seem so out of place. Instead, the contemporary Hip Hop scene is more interested in hyperactive 1000 word-per-minute emcees backed by cookie cutter production. With such lowered expectations of course it’s difficult to understand dälek's frustrations in the fiery opener "Distorted Prose." If you're used to emcee's boasting about their skills, you might miss the history lesson in urban oppression on "A Beast Caged." And if you can't believe that hip hop music can or should be complicated, emotional and breathtaking, you'll probably want to pass over the MBV-drone bliss of "Ever Somber" or the sheer sonic terror behind "In Midst of Struggle." But then again, if you missed all that rest assured MTV will soon pump out another mindless Hip Hop record that you won't have to worry about. One that won't offend you, or make you think, or challenge your expectations. This is not that record. This is an album of violence, pain and the challenges of life. And they never sounded so good.