dea Lesson No.1: I CAN'T LISTEN TO ANYTHING ELSE I TRIED BUT IT ALL SOUNDS SHIT 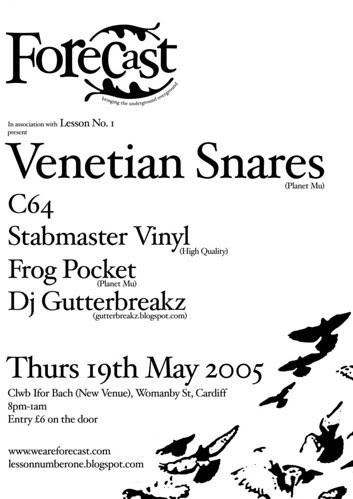 ALERT! ALERT! New venue announced for Venetian Snares! Clwb Ifor Bach is officially the only venue in Cardiff that can handle this shit. Miss this and you shall regret your foolery for the rest of your days.

The following text was liberated from the website Fail Technologies. Originally printed on March 17th 2005. Thanks to Sheikh

"I hope I do interesting things with jungle", claims a tired Aaron Funk. His current state of fragility belying his appearance: tall, beefy and not too dissimilar to a Nordic viking, Yet his personality gives nothing away as to the music that he is known for.

To most, it can seem incoherent and messy, like a grown man throwing a child-like tantrum. But for those able to capture and process quick enough, it's obvious that it's lovingly slaved over. Each variation of the Amen break morphed, spliced and shredded to within an inch of its playback life has had thought and care applied.

OK, so not everything seems to be consistent in his approach. Sometimes, the super-technicality of it all can get in the way of a good tune. Comments leveled at his material frequently include the words 'cold' and 'detached'. But I find his music is often loaded with emotion and playfulness. It all goes against the grain of his alloted genre: 'breakcore'. Which hints at digital nihilism; just wanton white-boy aggression via sequencing software; throwaway, bereft of meaning and disposable.

The nuggets in his past missives are numerous, but for those still not convinced. I would point them to 'Rossz Csillag Allat Szuletett'. His latest and seventh full-length release for Mike Paradinas' Planet Mu label. Many of those already subscribed (and there are plenty, if Mu's sales figures are to be believed) are convinced this is his most audacious release yet. Fusing a classicist european palette with ear-splitting high-velocity acts of free-fall rhythmic vandalism, results in an album of stark contrasts.

Formulaically simple: classical strings used to build up the tension, brutal bursts of breakbeats used as release. Best demonstrated on the astonishing 'Szamar Madar'. I'll leave it to Jon Soul Jazz to have the last word. His portable digital playback device momentarily paused, his body and mind slowly re-aligns....."I can't listen to anything else. I tried, but it all sounds shit."