dea Lesson No.1: A NEW KIND OF RHYTHM

A NEW KIND OF RHYTHM 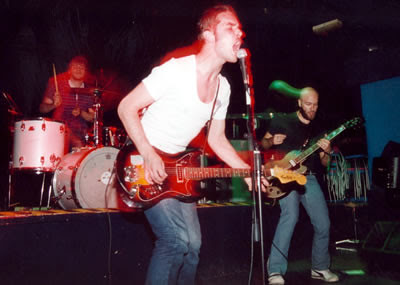 Do you like... the skewed percussive assault of bands like Arab On Radar and late-period Fugazi? Do you like... athletic Swedish men with pencil moustaches and unusual beards? Then you'll love... Kid Commando! We love Kid Commando. Their debut mini-album, 'Holy Kid Commando' - one of our favourites of last year - came out on Ache Records (who also brought you Death From Above 1979) and they've got another record out in April on Tigerbeat6, which seems like a funny old pairing, but that's just the way things are nowadays, isn't it? Anyway, we're putting them on in Newport Le Pub on January 24th, and you should come. Support comes from our friends the Martini Henry Rifles, whose 'Superbastard' LP is currently warming our turntable inna Brainiac/Big Black style, Jon Chapple (ex-Mclusky, God rest their fantastic soul), who'll be sharing with us the delights of his record collection, and one more band, Bristol's Male. They're pitched as “Karen O and Todd Trainer covering The Slits”. We'd buy that for a dollar. Smart MP3 over at their website, so scoot.

If you want to hear Kid Commando, there's MP3s up at the Ache Records site. If, however, you just want to look at some more nice photos, go here.