dea Lesson No.1: IT'S ALL ABOUT THE DANCE PARTY

IT'S ALL ABOUT THE DANCE PARTY 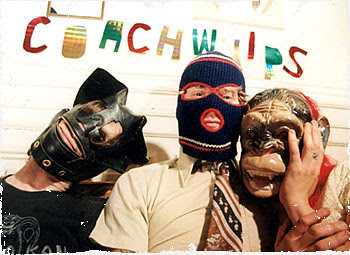 "These be some fucked-up fearful times... we're all hoping the Coachwhips can simplify the revolution with an explosive sound that'll drop yer pants to the ground. Republican Party, Democrat Party... fuck that noise, it's all about the DANCE PARTY..."

Now we don't want to distract you from the real big deal this month (ie the Kid Commando show, click here for a surfeit - nay, a panoply - of details) but we'd like to tell you a little bit about a band we've got coming over in March, the Coachwhips. San Fran's Coachwhips are the smacked-ass brainchild of John Dwyer, bug-eyed Providence veteran rock'n'roller who's previously laboured in about 937 other bands - most notably, Dig That Body Up It's Alive and Load Records' other incendiary masked two-piece, Pink And Brown. 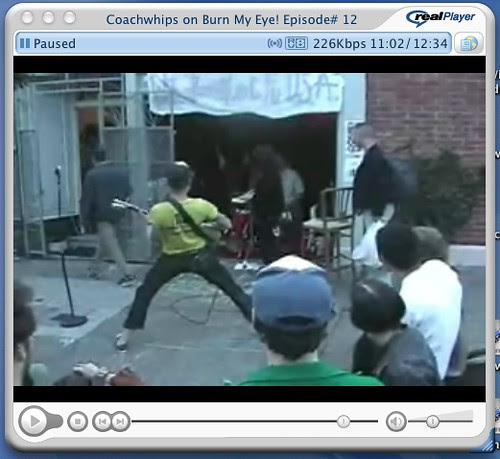 Formed with keyboardist Mary Anne McNamara and drummer John Harlow in 2001, the Coachwhips have cranked out four progressively un-progressive, seat-of-the-pants deranged garage-punk records for Narnack Records, the most recent being last year's Weasel Walter-produced Bangers Vs. Fuckers and the forthcoming Peanut Butter And Jelly Live At The Ginger Minge. You can download a song of theirs, 'Made A Bomb' here, but if you've got the time (and RealPlayer) we recommend you download this short courtesy of defunct underground TV people Burn My Eye. There's this great bit towards the end where they're playing this impromtu outside show and Dwyer walks up to this gawping mong with a plastic bag and tries to have sex with him, eliciting the most epically half-hearted stage invasion of all time. Anyway, we're putting them on with Peel favorite Steveless (motto: "It's kind of like music!") and some other band in Cardiff's Dempseys on March 6th, so carve that date on a nearby surface.