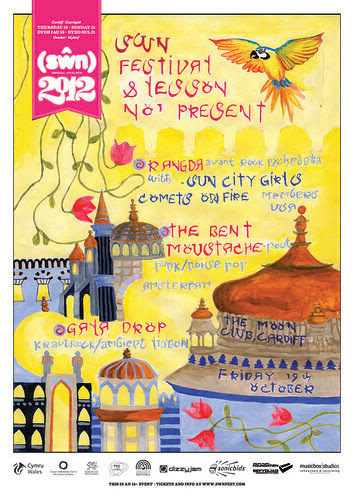 This weekend is the sixth instalment of the Swn Festival, which started off by putting several dozen bands on in Cardiff over three days and has grown exponentially since then. Lesson No.1 has been a part of it each year, and has had lots of fun doing so each year. I like to think that our place in its sprawl is that of noisy outliers who offer something to duck into if you’re not finding proceedings wild enough, or suspect that too many acts on the bill are biting the same styles.


That probably sounds really arrogant or superior or whatever, but I don’t mean it to be. I just think it’s good and necessary to do something that sets itself apart from the rest of the lineup, which is plenty eclectic as it is. Besides, I don’t play in the bands, I just choose them, or help to choose them. Basically, any setup that enables White Mice, Devil Man, Bellini, Årabrot, Swans, Skull Defekts or the three bands who are visiting this year to play in your area is on the side of good. I’m about to go out so I’m just going to copy the blurb I wrote for the Facebook page, I think it all makes sense though.


Incomparable American power trio RANGDA, have just released their second album ('Formerly Extinct', on the DRAG CITY label), and as with their 2010 debut 'False Flag', they've come to Cardiff on the resulting tour. They feature three of the USA's greatest living exponents of underground rock and avant-garde music: Ben Chasny (Six Organs Of Admittance, Comets On Fire and more); Rick Bishop (Sin City Girls and solo work as Sir Richard Bishop) and Chris Corsano, free jazz percussionist wizard and guest drummer on the last-but-one Bjork album. Their sound takes in psychedelia, drone, free improv and myriad Middle Eastern musics, and they are a total joy to witness at their craft. Here is a bit of extra info about Rangda and what Rick has been up to from The Quietus, the questions coming from my brain. They are probably stupid or something but Rick is definitely not.


Based in Amsterdam, THE BENT MOUSTACHEare headed by Ajay Saggar, a spiky postpunk veteran who used to be in the bands Dandelion Adventure and Donkey. He's also My Bloody Valentine’s soundman, so he knows the value of a good ear-cleansing. TBM's debut album, 'Pastures New Seasons Turn', is an eclectic, scrappy but accomplished record which can be played in the middle of this illuminating interview, again from The Quietus.


From Lisbon, Portugal, GALA DROP have been making cosmic, drifty psychedelic drone radness since the mid-00s. They've scored props from tastemakey online places (Resident Advisor, Gorilla Vs Bear) and musicians such as Animal Collective’s Panda Bear and Ben Chasny (see above), who they released a collaborative 12" with a few months ago. They also have a 2008 debut album and an EP on cult house jams label Golf Channel.


This all takes place at The Moon Club, Womanby Street, Cardiff. Doors are at 7pm, Gala Drop on 7.30pm approx; The Bent Moustache 8.30 or so and Rangda run from 10-11pm. We are going up against other good stuff, notably Liars over the road in Clwb Ifor Bach, but I’d be pretty surprised if that didn’t fill up; if it does and you’re shit out of luck, revise your fortune by coming to see Rangda. You will not regret it. (People that saw them two years ago in Cardiff, in the Norwegian Church, will know tihs.) Admission is TBC but Swn costs £20 for a Friday ticket (getting you into all venues) or £65 for a weekend ticket. Support rad bands, go and check out interesting-sounding stuff, Toddla T after hours will probably be good as will Pedestrian in Undertone. Alright?