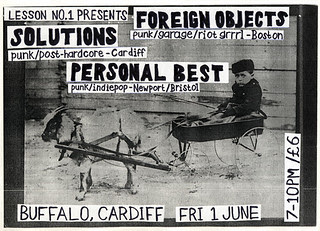 I just went to see the band High Places play a live set. They were a bunch of fun! It felt like a weird and slightly misassembled version of late 80s/early 90s chart house, like something that would have been signed to Rhythm King or whatever. I dunno, I’m too young to know what I’m talking about really. There wasn’t enough people there though, for a band that came all the way from the USA’s east coast, so it would be really really really nice if more folks turned out for my gig on Friday (probably the last one I’m gonna do til at least the autumn, by the way), headlined by Boston, MA’s FOREIGN OBJECTS.

There are four people in Foreign Objects, three ladies and a bloke, and they make the sort of winningly catchy punk rock I’ve probably not put enough of on over the years. They have a few singles on 7” out there, and according to the tumblr of the label (Cut The Cord That Records) issuing their newest one, it should be “out this week”, hopefully meaning they have copies with them. If not, try their ‘No Sensation’ LP. If you like the early 80s cream of the Dangerhouse label, the more rock’n’roll side of riot grrrl (the first few Sleater-Kinney albums, for example), and all manner of spiky garage rock and postpunk jawns, I think this is for you. Foreign Objects have members of Ampere, who have kept a torch burning for that chaotic fall-over style of 1990s screamo, and the Libyans, who I never listened to because I suck. Regardless, it equals DIY punk pedigree.

I think this will be great Friday night music before you go on a four-day bender because of a public holiday given for reasons you likely don’t care about or find contemptible. Foreign Objects will be onstage about at about 9.30pm, too, and done by 10, so come down early! And check out the other two bands. SOLUTIONS have been going a few years, evolving from a band called Gunrack? (a truly ‘banterous’ movie reference) and releasing a few things including an album, ‘Before The Roars’ and a split CD with Goodtime Boys. They trade in that taut-but-grand 90s post-hardcore thing that I guess At The Drive-In made most famous, but there’s a more direct punk rock element to them, and the fandom of that whole ‘gruff’ Gainesville/No Idea Records malarkey. Solutions’ second album is out pretty soon, I believe, and presumably some songs will be played off it.

First on are PERSONAL BEST, who upset everything you understand about modern self-promotion by not having a website, blog, Facebook, Myspace, Bandcamp, Soundcloud or account on Silk Road (look it up) where they sell flash drives of their music inside bags of cocaine. The hyperlink above is a messageboard thread about them that has some reviews of their few gigs so far. “Owing as much to the forceful power of Sleater-Kinney and Superchunk as Best Coast and Belle And Sebastian,” said someone; another compared their guitar/drums/vocals directness to The Muffs, which is a badge worth wearing. As you can maybe tell, I haven’t heard Personal Best’s music yet, but because they include Kate from Cardiffian country/indie/punkers Bedford Falls, and someone from Bristol punk band Caves, I am happy to go on trust and instinct.

Doors are at 7pm for this; Personal Best will be on at 7.45 or so and it’s £6 on the door. If you’re reading this and have been to one or more Lesson No.1 shows over the years, thank you for doing that. I guess it’s why I/we kept putting them on. It wasn’t because it made girls like us, I can tell you that much.