dea Lesson No.1: GOODNIGHT SEATTLE WE HATE YOU*

GOODNIGHT SEATTLE WE HATE YOU* 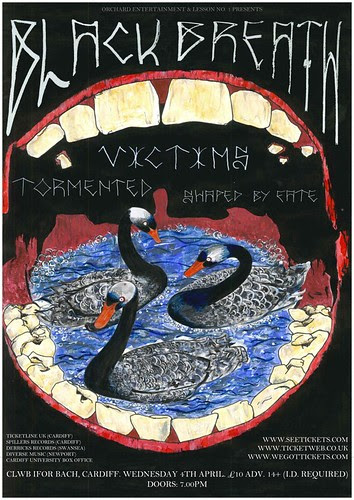 Lesson No.1 doesn’t put on that many bands where it’s imperative/desirable to fuck people up in the mosh, and even when we do, sometimes it doesn’t happen for whatever reason. No biggie, it’s not normally my thing anyway. The last time we put Seattle’s utterly killing BLACK BREATH on, however, people banged their heads and pushed into each other a bit and spilled some lager, probably. They were doing it because Black Breath crush as a live band: twin-axe amp stack singer-in-the-crowd concoctions of early Swedish death metal, post Cro-Mags crossover, the crustiest hardcore out of Umea/Portland/Bristol/name your epicentre... totally oppressive, fully inclusive, vicious GOOD TIMES.

And now they’re coming back to Cardiff to do it all again. This time they’re in a bigger venue and they have an extra 40 minutes of material in the form of their out-this-week second album, ‘Sentenced To Life’, which is pretty much like the first album and the EP that came before it, only better. Man, if I’m not busy with something when the intro to ‘Doomed’ kicks in, I’m going to throw a table across the room and put a broken Foster’s bottle across my neck. Unless someone points out to me how irresponsible that would be.

Black Breath are also touring with two bands this time, making this a VFM four-act bill in total thanks to a rare and based exclusive show courtesy of SHAPED BY FATE. They have a new album in the can, so expect to hear a bunch of that, along with their singer mocking you for not throwing tables across the room etc. He’s the original #bantersaurus! Cosily, Richey from Shaped By Fate also did the cover art for ‘A Dissident’, the most recent album by VICTIMS from Sweden. They write Clwb Ifor Bach as ‘Clwb For Ibach’ on their tour poster, but it’s OK cos their music bangs hard. Still loyal to the D-beat game, like when they formed in the late 90s, they also have lots of lozenge-requiring Lemmy vocals and hardcore-is-metal guitar leads a la Poison Idea. I could listen to them all day, but 30 minutes or so is probably the perfect length.

Finally, TORMENTED, also from Sweden (Finspång, it says here), are the dark horses of the bill from where I’m standing. If you check for death metal more than crust or whatever, though, you may disagree. I don’t mind if you call me a pussy. Let it all out. Anyway, these guys are on the Listenable label and are ex-members of a ton of bands, including effing MARDUK for goodness’ sakes, and exist to mine the rich seam of DM from before it got super technical and drum triggery and Protooled – Autopsy, Death, Pestilence, Possessed, that kind of thing. They do this very ably, which means they sound dirtier than Colin McRae’s mudflap, and fast as shit but not just for the sake of it. I can’t fucking get over how heavy this bill is!

Which is probably the point where I should stop acting like I deserve some sort of praise for bringing it to Cardiff, and give props to Greg Barton of GRAB Promotions, as he’s been the main guy that’s made all this happen, and I’m just helping out with plugging it. The best way I can think of doing that is by saying that if you care even one tiny bit about metal and don’t go to this show, you should drown yourself in a bath filled with stomach acid.