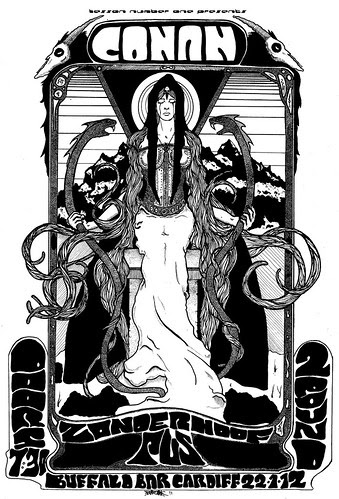 OK, so basically the deal with this gig is that it’s an identical lineup to one that took place in October, which was written about here, which is comfortably still on the front page of this blog. If you want to know why it’s being done again, I guess try and find the thread for the original gig on Southwalesmassive for (some would say) an overly comprehensive explanation.

Long story short, Conan drove down from Liverpool just to play the show, played for about ten minutes and were physically coerced into stopping by the relief* landlord of the venue, who had been drinking solidly for something like 15 hours, due to Wales’ world cup game that day. Then they drove back to Liverpool again. What a rip! Well they didn’t want to leave things hanging like this, neither did the folks who organised the show, and the fine Swalian metal/punk/whatever dudes who attended didn’t really get to see the headline band. So we booked CONAN, ZONDERHOOF and PUS into Buffalo for Sun 22 Jan – that’s THIS SUNDAY – and will be letting you in for only TWO QUID.

In exchange you will get to see three kickass bands do their thing, and no staff members will be drunk to the point of abject incapability. Regarding the bands themselves, most of what I wrote a few months back still applies, I think: Conan have finished recording their new album, which might be their debut depending if you think four-song, 30-minute slabs of stone called ‘Horseback Battle Hammer’ are albums or not, and will doubtless be playing a wedge of it. Pus have continued to get glowing reviews for their debut EP, likewise Zonderhoof for their ‘Hakken!’ full-length.

Basically it would be really neat if you could go to this and finish off a job that was left incomplete by the vagaries of the pub/gig interface. Don’t blame pubs, though. They’re not the guilty party here.

*this means that he isn’t the normal landlord, and this sort of thing doesn’t normally happen. I went to see Diet Pills and others in there about six weeks afterwards, it was just as loud, and everyone was good people.