dea Lesson No.1: DOT.CROM START UP 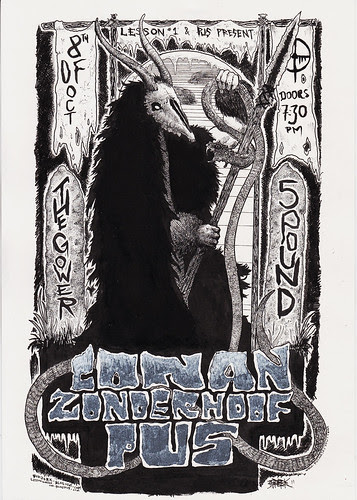 Just over a year ago Lesson No.1 helped some folks out with a Cardiff show for a band called CONAN, who come from Liverpool and play bone-meltingly powerful sludged-out doom metal. I don’t know if everywhere they play gets this treatment, but they helped increase their affability by posting on local messageboard Southwalesmassive in the style of some kind of comedy Norse warrior. Because they’re called Conan, I suppose. Anyhoo, it all helped get folks’ dander up for the show, which was in Buffalo and owned hard.

Since then, Conan have incrementally increased their standing in the doom community by a combo of rare-but-valuable shows, and good auld word of mouth. They’ve also added to the one release they had in 2010 – a lumbering four-song half-hour monster called ‘Horseback Battle Hammer’ which I reviewed here – in the form of a split album with oppressively bleak Irishmen Slomatics. It’s out on Head Of Crom (12”) and Burning World (CD) and I’m pretty sure you’ll be able to buy both at this show happening on Saturday.

Support this time round comes from ZONDERHOOF, a Cardiff band who have been (at) large in the city since the middle of last decade. If you’d gone to WH Smugs and bought last month’s issue of Terrorizer magazine, which usefully has been taken off the shelves literally today as I type, you would have got a FREE copy of ‘Hakken!’, their debut album. Instead, you can buy it in a proper case at the show or from Undergroove, the label boss of whom is a Terrorizer staff member. HE’S TRYING TO GIVE YOU SOMETHING GOOD FOR FREE, DUMBASSES. Oh yeah, what does their music sound like? Fine and bottom-heavy rumbling instrumental metal averaging about seven and a half minutes per song, with a Melvins jones but much for fans of Keelhaul, Capricorns, Neurosis, Loincloth und so weiter. They don’t play live enough, so come out and pay respect.

First on (probably a wee bit after 8pm) are PUS, who were also one of the supports last time out. They’ve got t’ings done since then, too – notably their debut EP, which came out on Universal Tongue/Feretro a couple of months back, and has been awarded glowing reviews by the doom community (them again). Some people seem to think that blazing up 24/7 is crucial to its appreciation, but I don’t think it’s necessary to shut out cowards like me in that way. “Relentlessly tranced out black dirge, doomy and psychedelic, mesmerizing and hypnotic,” is another line from a review, though, and I’m pretty well on board with that.

So yeah. This is once again only a fiver to get in, the drinks are cheaper here and it’s a Saturday. If you’ve already given yourself over to the Michael Forever concert in the Millennium Stadium, perhaps as a result of working in one of the companies that got free tickets for every employee as they literally can’t give them away, then... sux2BU.