dea Lesson No.1: SHINE CAUSE I GRIND

SHINE CAUSE I GRIND 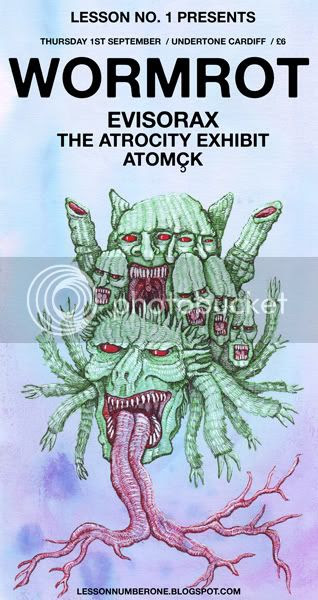 What sort of music do people think of when they think of Cardiff-based gig promotions entity Lesson No.1? It is not a question you expect to be asked. Maybe a better one would be “do people think of Cardiff-based gig promotions entity Lesson No.1 at all?” Whatever, if you’re reading this you’re thinking of it. Right? But your answer to the original question will probably not be “incredibly deranged and badass 30-second-song grindcore,” and that is fair enough... as long as it doesn’t stop you from coming to see this blitzin’ four-band bill on Thurs 1 Sept, headlined by Singapore dealers of disgustingness WORMROT.

Grindcore has been a properly global scene for at least the last 20 years, having been galvanised by tape-trading, zines etc. Being angry about social injustice is a truly cross-cultural pursuit, as is watching gross gory movies, so no wonder that you can find grind in nearly every nation on earth. Wormrot formed in 2007 and quickly got to work releasing EPs and splits; in 2009 Digby from Earache Records got in touch after hearing them on the internet, and Earache reissued their debut album, ‘Abuse’, the following year. ‘Dirge’, its followup, came out a few months ago, and is just as crushing – 18 minutes, 25 songs, incredibly exhilarating energy and precision, production by a chainsaw with 10,000% perfect hearing.

It’s funny. If Earache Records had never got started, Wormrot might not play the music they do now – Napalm Death, Carcass and others would have surely found an outlet for their grind prototypes, but without Digby’s dedication, who knows what might have happened to the scene. And yet the label has been through the wringer like almost no other since the early 90s, earning a reputation best described as ‘mixed’. Even amid the Ademas and Adrenalin Junkies, though, there’s always been some decent-to-great stuff on the roster, and it’s telling on some level that the two grind bands Earache have released in the last few years – Wormrot and Insect Warfare, who Lesson No.1 put on in 2009 – have been two of the realest motherfuckers active in the genre. Moreover, if being on Earache has helped Wormrot get over to the UK, then you don’t know how damn lucky you are.

In the support ‘slots’ are three of the raddest examples of the worldwide grind aesthetic in the 2010s. EVISORAX are from Wigan and have shifted genre priorities in recent times, from brutal (or maybe even br00tal) death metallisms to musclebound technical grindcore. This has much to do with a rejigged lineup that features ex-members of Narcosis – who also got a discography issued on Earache a while back, and also owned – and post-Narcosis outfit the Ergon Carousel. They have an album called ‘Isle Of Dogs’, which it says here is out on the actual day of this show! They’re the UK tour support, too, so expect no slacking from them, else Wormrot will make them look like CHUMPS.

The other two bands on the bill, THE ATROCITY EXHIBIT and ATOMÇK , have in fact just been tour partners themselves, on a continental jaunt that took in the legendary Obscene Extreme festival. The former of those bands come from Northampton and Milton Keynes, and also have a bit of death metal in their DNA, while also touching on overdriven crust battery. They have a few EPs out there somewhere, and a three-way split thingy with Magpyes and Jesus Of Spazzereth (I just like typing their name). As for Atomçk, I wrote some blurbabout them less than a month ago, which obviously still applies... EXCEPT they sorely need a new drummer, as the current dude is going to explode after this show. In fact, they’re saying that if no-one steps up to the stool, this might be one of their last gigs EV-ARRRRGGGGHHH. So if you like this kind of music and can play a fucking blastbeat, get in touch with the band on their Facebook page or whatever.