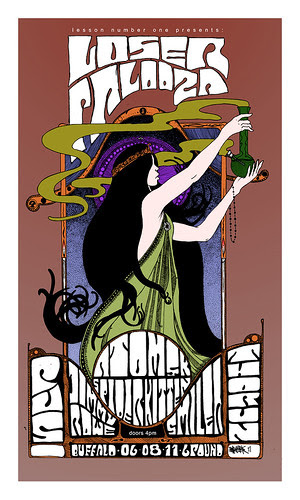 You don’t have to be a man to go to this of course, that would be completely insane and inviting a world of trouble, but it is undeniable that over the course of this six-hour extravaganza, you will be seeing nothing but penises onstage. Or you would if all the bands played in the nude. MOVING SWIFTLY ON, this show focuses on the local (to South Wales, in origin at the very least) and the heavy. Lesson No.1’s name is on the poster but thanks be to Chi of Spider Kitten for the day’s name, the 90s-tastic Loserpalooza; Rhys from Pus for the psych-tabulous poster; and the bands in general for spending the last three months hyping it. Now all it needs is for you to attend.

Here, I shall attempt to explain why you should, one band/sentence at a time. You might have seen some or all of these before, but some don’t get to play as often as they should – Pus haven’t ‘done’ Cardiff this year, for example – and you might have missed others because they opened the bill or something. Today you should have no excuse (disregard if you have an actual excuse), as it’s a Saturday and is supposedly gonna be nice weather. It’s £6 on the door, which is a pound per band, or get a £5 ticket from the link on the right. This is how it will happen.

THORUN: Cardiff quartet play music which has no vocals but speaks through the medium of epic stoner rock, doom and classic metal (5pm).
PUS: incredibly zonged-out and oppressive lo-fi sludge with treats for fans of Eyehategod, Electric Wizard or Fleshpress, and a spanking new debut EP on the Universal Tongue label (5.45pm).
SMILER: frantic hardcore with overtones of crust, powerviolence, thrashcore and 90s UK fodder like Hard To Swallow, as showcased on their Seven Records mini-album ‘Con-Demned’ (6.30pm).
JIMMY ROWE: deeply rare live appearance by a dude who plays gravelly blues-rock that swings and twangs inna Creedence/Allman Bros/Peter Green manner (7.15pm).
SPIDER KITTEN: a decade deep as a band, their current lineup – featuring three guitarists and Chris ex of Taint on drums – is their most powerful yet, and their grungey invocations of psychedelic doominess will alter your head (8pm).
ATOMÇK: intense grindcore trio whose vocals/guitar/drums/no bass setup takes in ample proggish and noisy angles – a split with Spider Kitten exists, likewise one with Chicago’s Paucities and an EP on the Grindcore Karaoke label (9pm).

So there you go. If you don’t know, now you know, blog-reader. This is gonna be really good and it finishes early enough (10pm tops) for you to go and carry on partying.