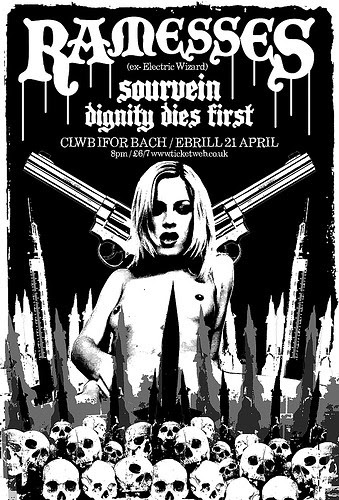 Wherein Lesson No.1 and South Wales Massive join forces for the first time, and Clwb Ifor Bach prepares to shake like a skyscraper struck by a wrecking ball under the combined onslaught of two of the heaviest bands of modern times. Formed from the ashes of Electric Wizard, UK’s Ramesses play warlike, freeform ultra-stoner/doom with a dark melodic heart beating within its blackened chest. To date, they have recorded one CD, ‘We Will Lead You To Glorious Times’, out now on Devil Doll. “… Glorious Times isn’t doom-rock as a gateway to the infinite,” decided Terrorizer, “It’s a full-on tightening of the screw.”

Sourvein, meanwhile, hail from the waterlogged Dirty South stronghold of New Orleans. Formed in 1992 under the influence of Black Flag, The Melvins, and Millions Of Dead Cops, Sourvein have since slowed their sound down to a tar-thick stoner sludge, albeit without losing T-Roy Medlin’s larynx-shredding, extreme metal vocal style. The band released a record, ‘Will To Mangle’, on Southern Lord back in 2002, and followed it up with the thunderous Emerald Vulture last year. Support on the night comes from Dignity Dies First and Twist The Knife, with JayX of South Wales Massive rocking the middle floor with all manner of punk/hardcore tunes. Say it: DOOOOOOOM